In 1960 a seven and a half acres tract at the corner of St. Joe and Flutter roads was purchased for $9,000 by Trinity Episcopal Church, 611 W. Berry Street, Fort Wayne. The rector, Fr. George B. Wood, and the Vestry had decided to build the first parochial mission in the northeast section of the city. In September 1961 the Reverend John B. Hills, the Director of Christian Education at Trinity, accepted the call to be vicar of the new mission named Saint Alban’s. The first organizational meeting of the new congregation was held at Trinity Church January 28, 1962 with sixty-one people present.

On February 4, 1962 the first service was held in a temporary quarters at Bojrab Club House, 5258 Lahmeyer Road. There were 35 families present, 114 individuals, of which 58 were children. The clubhouse remained their church home until May 5, 1963.

The original St. Alban’s Church
The congregation held the first service on May 5, 1963. They joined in a procession from the clubhouse with cars loaded with everything that was used at the clubhouse. Fr. Hills led the procession driving his red Volkswagen with the processional cross protruding from its sunroof.

The cornerstone laying ceremony took place on May 10, 1963. A time capsule was placed in a copper box which contained a number of momentos, including a stone from the original St. Alban’s in England.

By 1964 the congregation had doubled, with eighteen confirmmands. In the spring of 1964 a vicarage was built at a cost of $ 25,000. Later in the same year Fr. Hills married Gwen Hughes, a Fort Wayne native. The first six clergy at St. Alban’s were hired by the rector of Trinity Church. In 1969 Trinity parish changed their bylaws to assure that St. Alban’s congregation would have at least one representative on the vestry. This person to serve a three-year term.

In 1970 a petition for enlarging the church school and a plan for financing the same signed by sixty-two families was presented to the Vicars committee at their February meeting by Fr. Smellie. An expansion fund was started.. Two mobile trailers were purchased for five hundred dollars each for extra classrooms.

In 1971 Bishop Klein consecrated St. Alban’s on February 7th to signify the end of the church indebtedness. The paid-up mortgages on both the church and the vicarage were by Fr. Wood. The church had tripled in size, now numbered 112 families. Fr. Smellie resigned in September 1971.

Father William Martin supplied through February 1972. In March 1972 Father Howell Anderson was appointed St. Alban’s new vicar by Father Corydon Randall, Trinity’s new rector. Father Anderson was a volunteer fireman and became chaplain of the St. Joe Township Fire Department. He died suddenly of a heart attack while on duty as a fireman on November 1,1972.

On January 1, 1973 St. Alban’s hired a fund raising company to launch the campaign. By May Fr. Williams reported having collected $ 110,000 for the expansion. The expansion cost was estimated at $ 234,00 In the meantime Brookside Evangelical Mennonite Church at 7308 St. Rd. was listed for sale for $ 190,000. The Vicars committee determined that buying the Brookside church was then best option. This plan was presented to Trinity’s vestry and approved. Moving date was scheduled for September 1974. The congregation borrowed $ 200,000 for the new mortgage and $ 40,000 for improvements. The’ old facility was sold to the Church of the Brethren on September 17, 1974 for $147,000.

St. Alban’s Church today
So St. Alban’s made one more move, and were welcomed by the Mennonite Minister Lorene Pine. The procession to the new St. Alban’s was led by Bishop Sheridan, clergy, vicar’s committee, combined choirs and the congregations of the three Episcopal altars of Fort Wayne. 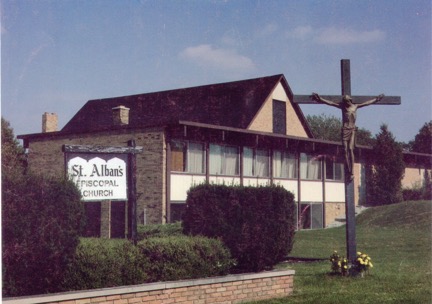 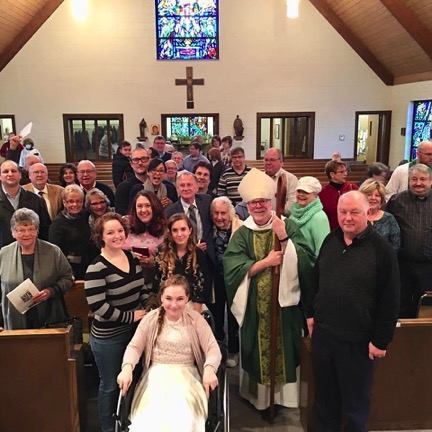 Saint Alban’s continues to flourish today. Our seventh and most recent rector, The Reverend Daniel K. Layden served our congregation for 12 years. In February of 2019 we began our search for a new rector. On November 27th, 2020 we welcomed our new Priest In Charge, Father Michael Roeske to our Saint Alban’s Family from North Carolina. We are excited to see where the spirit will guide us next! We strive through our worship, education, and outreach programs to be a light of God’s love in Fort Wayne Indiana.